The Livingstone Daisies (Cal Walker, Michael Barclay, Liz Stringer and Van Walker) are proud to announce their final Melbourne show of 2013 with their pals The Grapes (Sherry Rich and Ash Naylor) who released their critically acclaimed sophomore album ‘Western Sun’ this year.

All year PBS announcer and all round nice guy Crispian Windsor has touted both band’s 2013 releases as potential albums of the year, so what better way to to cap off the end of another calendar year before the madness of Christmas with a night of glorious jangle and melody, and maybe some friendly rivalry, if that’s possible with two bands peddling sunshine and harmony.

Visit the Northcote Social Club website and get tickets now! 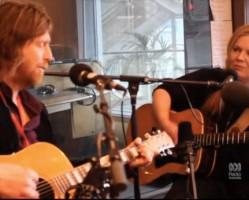 They’ve just released their second album ‘Western Sun’, and popped into our studios to play a track live, especially for you. The song’s called ‘Lily Darling’ , a beautiful ode to Ash Naylor’ young daughter.

Check out the video below.

their psychedelic-country chemistry has grown richer, darker and infinitely deeper”